If there was one person the American public wanted to hear from once news of the Normandy invasion broke, it was Ernie Pyle. Through his work in North Africa, Sicily and Italy, millions had come to rely on the diminutive columnist’s vivid portrayals of everyday soldiers. Now that the most overwhelming day of the war had arrived, surely Ernie would be the one to put it in perspective, to humanize it.

America’s best-known war correspondent was among the few slated to hit the beach on D-Day — one of 28 men scheduled to take part in “what was termed the assault phase,” as he would put it in his first post-invasion column.

But Pyle’s loyal readers wouldn’t get to read his insights on June 6, or the next few days. Undoubtedly deluged with concerned inquiries, numerous newspapers printed daily notices beginning with their D-Day extra editions explaining that no copy had yet been received from the Scripps Howard man.

A dispatch finally arrived in time to be printed in June 10 editions, but it had been prewritten during Pyle’s trip across the Channel and sent “back to England by dispatch boat as soon as we hit the beach.” This placeholder piece carried a dateline of “ON THE NORMANDY BEACHHEAD” but offered no insights into the action that had taken place four days earlier.

It would be two more days, nearly a week after the long-awaited event, before Pyle would get his words off the beach and into newspapers back home. Frustrating as the delay must have been for Pyle — not to mention his anxious bosses — the columns that arrived June 12 and in the days to come would be worth the wait.

Due to a “last-minute altered arrangement,” as he put it in his first piece filed from France, Pyle didn’t make it ashore until the morning of June 7, by which point Omaha Beach had calmed considerably. The aftermath of the bloodiest fighting the invasion troops would face that day remained jarring.

All that remained on the beach was some snipers and artillery fire and the occasional startling blast of a mine geysering brown sand into the air. That, plus the gigantic and pitiful litter of wreckage along miles of shoreline. Submerged tanks and upturned boats and burned trucks and shell-shattered jeeps and sad little personal belongings are strewn all over on these bitter sands.

That, plus bodies of soldiers lying in rows and covered by blankets, the toes of their shoes sticking up in line as though on drill. And other uncollected bodies still sprawling grotesquely in the sand or half-hidden by high grass behind the beach.

With no actual fighting to observe, Pyle attempted to convey the challenge this particular beach had presented to the men who had landed the day before. He described massive concrete gun emplacements and hidden machine gun nests, barbed water and underwater obstacles: “Germans had whole fields of evil devices to catch our boats.”

Those were mere mechanical impediments, though — nothing to match the inevitable hero of Pyle’s prose: the American fighting man.

Now that it is over it seems to me a pure miracle we ever took the beach at all. For some it was easy, but in this special sector where I now am our troops faced such odds that our getting the shore was like me whipping Joe Louis down to pulp. In this column I want to tell you what opening the Second Front in this one sector entailed, so you can know and appreciate and forever be humbly grateful to those both dead and alive who did it for you.

Initial reports from Normandy were pooled among all media outlets, so columns like Pyle’s initial effort received far greater circulation than the 300 or so newspapers that normally printed his work six days a week. And now that Pyle had his own foothold of sorts on the far shore, he would quickly find a familiar rhythm.

Over the next few days, Pyle would backtrack to tales of being summoned to invasion duty, of his Channel crossing aboard an LST, of the magnitude of the invasion armada: “We surely saw there before us more ships than any human had ever seen before at one glance.”

But the column that ran June 16 in many newspapers stands as Pyle’s signature statement on the invasion. Datelined D-Day Plus Two — June 8 — the delayed piece leads with a simple statement of fact: “I took a walk along the historic coast of Normandy in the country of France.”

From there, Pyle deploys, rapid-fire, one vivid bit of imagery after another in a breathtaking exercise in scene-setting.

The water was full of squishy little jellyfish about the size of your hand. Millions of them. In the center each of them had a green design exactly like a four-leaf clover. The good-luck emblem. Sure. Hell, yes.

I walked for a mile and a half along the water’s edge of our many-miled invasion beach. You wanted to walk slowly, for the detail on that beach was infinite.

Pyle takes his time, casting his eyes across the scene, from surf to sand and back again.

In the water floated empty life rafts and soldiers’ packs and ration boxes, and mysterious oranges.

On the beach lay snarled rolls of telephone wire and big rolls of steel matting and stacks of broken, rusting rifles.

On the beach lay, expended, sufficient men and mechanism for a small war. They were gone forever now. And yet we could afford it.

We could afford it because we were on, we had our toehold, and behind us there were such enormous replacements for this wreckage on the beach that you could hardly conceive of their sum total. Men and equipment were flowing from England in such a gigantic stream that it made the waste on the beachhead seem like nothing at all, really nothing at all.

Pyle finishes with a description of German prisoners, lined up on the beach and staring blankly out to sea, not yet confined to “the prison cage” like some of their comrades.

They didn’t say a word to each other. They didn’t need to. The expression on their faces was something forever unforgettable. In it was the final horrified acceptance of their doom.

If only all Germany could have had the rich experience of standing on the bluff and looking out across the water and seeing what their compatriots saw.

In the end, that’s all Pyle wanted — an end to this war, as quickly as possible. This column, like many before it and to follow as the conflict ground on, brought home those everyday horrors so many were experiencing so far from home.

Once again, Pyle’s impact was outsized. The column received prominent play in hundreds of newspapers. The “home” paper for Scripps Howard, D.C. tabloid The Washington Daily News, devoted the entire front page of its June 16 edition to Pyle’s column. The headline that ran beneath the masthead and over the bumped-up type of the column itself read:

THIS IS THE WAY IT WAS … By Ernie Pyle 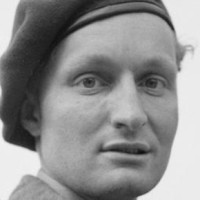 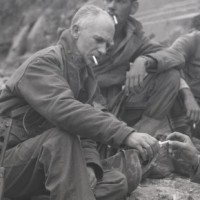